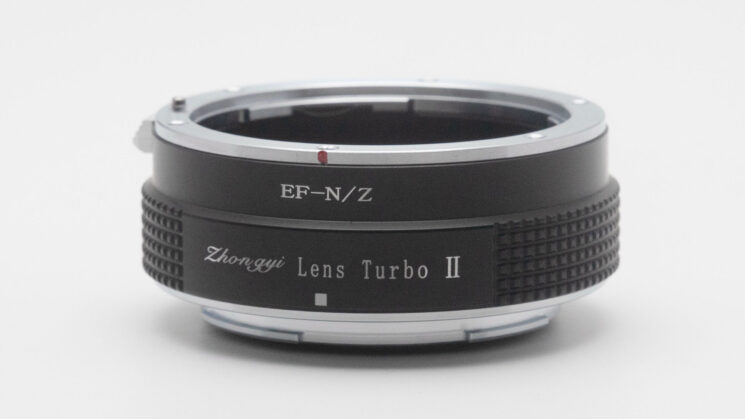 ZY Optics has announced its new Zhongyi Lens Turbo II. It’s a 0.72x speed booster for Nikon Z mount APS-C cameras. There are three versions available that let you use full-frame M42, Canon EF and Nikon F mount lenses on the new system with a wider field of view than you’d otherwise get on an APS-C body. It also gives you an extra stop of light and brings back some of that shallow depth of field.

It’s not an autofocus adapter, like the Nikon FTZ and this is reflected in the price, but it does mean that when you’re shooting video, you’ll get to use some of those classic lenses that people have been using with their other cameras for years.

The adapter brings the Nikon Z 1.52x crop factor back to about a 1.1x crop. This means your 24mm full-frame lens on your Nikon Z50 or Z fc will give the equivalent field of view to about 26.4mm on a full-frame body and offer a very similar field of view you’d get to using the 24mm on its originally intended full-frame body, too.

For photographers, this probably isn’t going to be all that useful, but for video shooters, it’ll let you use those classic M42 lenses like the Jupiter-9, Super Takumars, Zeiss Pancolar and Helios 44-2 as well as those classic old Nikon AI manual focus lenses. And if you’re a serious video shooter, you’re probably used to working with manual focus anyway. Throw a focus gear ring on it and you’re good to go.

I’m not sure what kind of aperture control you’ll get, if any, with Canon EF or Nikon’s electronic aperture lenses as there doesn’t appear to be any kind of electronic communication passed through or translated. With Nikon G mount cameras, however, there is a ring that lets you manually control the aperture of the lens. If you’re using M42 or Nikon D or AI lenses, then you’ve already got full manual aperture control.

The Zhongyi Lens Turbo II is available to buy now for $149 from the ZY Optics website and is available in M42, Nikon F and Canon EF mounts.

It’s funny, I was just looking for a decent M42 to Micro Four Thirds speed booster the other day. No such luck (although I’m open to any recommendations you may have in the comments). Maybe I’ll just grab myself a Nikon Z fc and one of these instead.