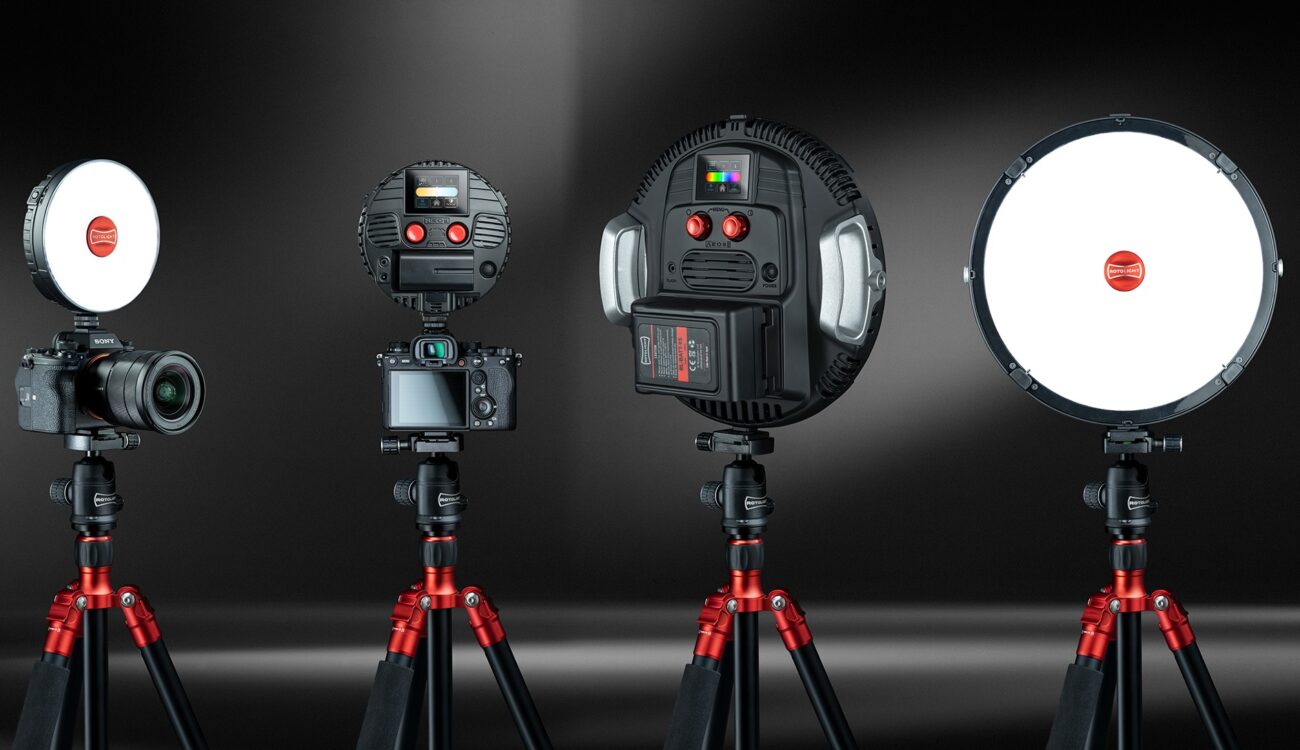 Rotolight’s NEO 3 and AEOS 2 lights are now available on Kickstarter. The smaller on-camera NEO 3 and the lightweight 1×1′ AEOS 2 light feature bright RGBWW panels with a high-speed sync flash function, touchscreen display at the back, as well as a new Rotolight app for controls.

The British lighting manufacturer Rotolight has been known for years for its round-shaped on-camera lights. More than two years ago, the company announced the large and powerful Rotolight Titan X2 to rival the notorious Arri SkyPanel – you can check our hands-on article from IBC 2019. One year after, Rotolight launched the 1×1″ version of the panel – the Titan X1. You can check our review right here. Today, the company launches a crowdfunding campaign for two new products – the Rotolight NEO 3 and AEOS 2. Let’s take a look at the features and specs.

The new Rotolight NEO 3 seems to be much brighter than the previous generation. In fact, Rotolight claims that the NEO 3 is the brightest on-camera LED light ever produced. The company, however, did not send us technical specs with the exact output measurements. We will add the information when we get it.

Another innovation is that the light now features a new, bespoke rechargeable lithium battery. No more AA batteries as with the NEO 2.

The second new light is a larger 1×1′ panel (but of course with a circular shape), named Rotolight AEOS 2. In this case, the company focused on a lightweight ultra-thin design. Rotolight claims that the AEOS 2 is the thinnest and lightest 1×1′ panel ever made. It weighs under 1.4kg. In terms of output, the light offers around 9,000 lux at 1m continuous and around 18,000 lux at 1m in flash mode. In CCT mode, the panel can produce white light between 3000 and 10,000K with a very high TLCI of 99.

Both new lights feature an RGBWW design with 16.7 million colors and accurate bright white (warm & cold) LED chips. All the colors and the included 2,500 digital filters are also available for photographers in a high-speed sync flash function with zero recycle time.

When it comes to controlling the fixtures, both new products feature a full-color 2″ touchscreen display with an easy-to-use interface and a feature-rich menu.

Additionally, Rotolight also launches a new iOS and Android app that will make it easier to control the lights remotely. Users will be able to easily switch between lighting modes to adjust color, power, SFX, and more. The app will be able to create custom groups and projects on up to 20 lights simultaneously.

The Smartsoft Box is Rotolight’s new feature that can electronically adjust the light’s diffusion, focus, and spread via the touchscreen or the app. These new lights can therefore easily change between soft and hard light sources without any add-ons.

The company will also offer a universal speeding adaptor for the lights that will enable using various Bowens-mount modifiers with them.

As mentioned above, both new lights are part of the new Kickstarter campaign launched today by Rotolight. It will last until November 16, 2021. The pledge prices in the campaign are between 20% and 25% below the planned retail price.

When it comes to the Rotolight NEO 3, the following rewards are available:

For the larger Rotolight AEOS 2 light, the following rewards are available:

Additionally, you can also order extra accessories, such as diffuser domes or batteries. Last but not least, Rotolight also offers bundles that include both lights.

We are saying this at the end of every crowdfunding-related article: please be aware of the risks when backing a project on a crowdfunding platform. Please read the crowdfunding platform’s terms and conditions carefully and keep in mind that there can be significant delays when delivering the product. Although we try to only write about trustworthy campaigns, some crowdfunding projects even don’t get delivered at all.

What do you think about the new Rotolight NEO 3 and AEOS 2 lights? What kind of lights do you use for your work? Let us know in the comment section underneath the article.

Horse Club Adventures heads to Switch on May 27th, 2021