Leavin’ on that midnight train for Eastward

From its outset, Eastward is soaked in style. It’s very clearly paying homage to a host of video games past, with its EarthBound and The Legend of Zelda nostalgia worn most prominently on its sleeve. Eastward is a game where even routine animations have a clear degree of craft put into them, and high moments dot the story, always ready to whisk you to a new side activity or little slice of life.

It’s also a narrative that has trouble maintaining an even pace, with a few characters and threads that feel left by the wayside by the story’s end. Its combat can feel a bit uneven, and at least on the Nintendo Switch, it had a good few technical issues, ranging from slowdown during hectic scenes to crashes.

Eastward is really difficult to nail down with a score. It does some aspects so well, and misses the mark in others. But even when it falls short, developer Pixpil has made it clear they’re a studio to watch for in the coming years.

Eastward starts in the underground town of Potcrock Isle, where veteran miner John watches over Sam, a mysterious girl he found in the caverns below. Sam dreams of the world outside, causing rifts among the community and eventually leading to the pair leaving the town and venturing out into the real world. It’s both not terrible in the ways they’ve been told, but holds new terrors they’ve yet to fully comprehend: the Miasma.

It’s a dark fog that plagues the world, threatening to swallow up everyone and everything. And as Sam and John travel ever-eastward, they start to unravel some of the mysteries behind what’s happened to the planet, while befriending the people they meet along the way.

Eastward sets these mysteries in motion, but they often sit in the background of whatever daily excitement is at hand. Eastward tells a great deal of story through cozy, slice-of-life segments. Often Sam ropes John into taking care of some daily chores for the town they’re staying in, or helping a new friend with a problem that’s been hounding them. It’s endearing, and the pair make a good vehicle for this, or at least, Sam does. 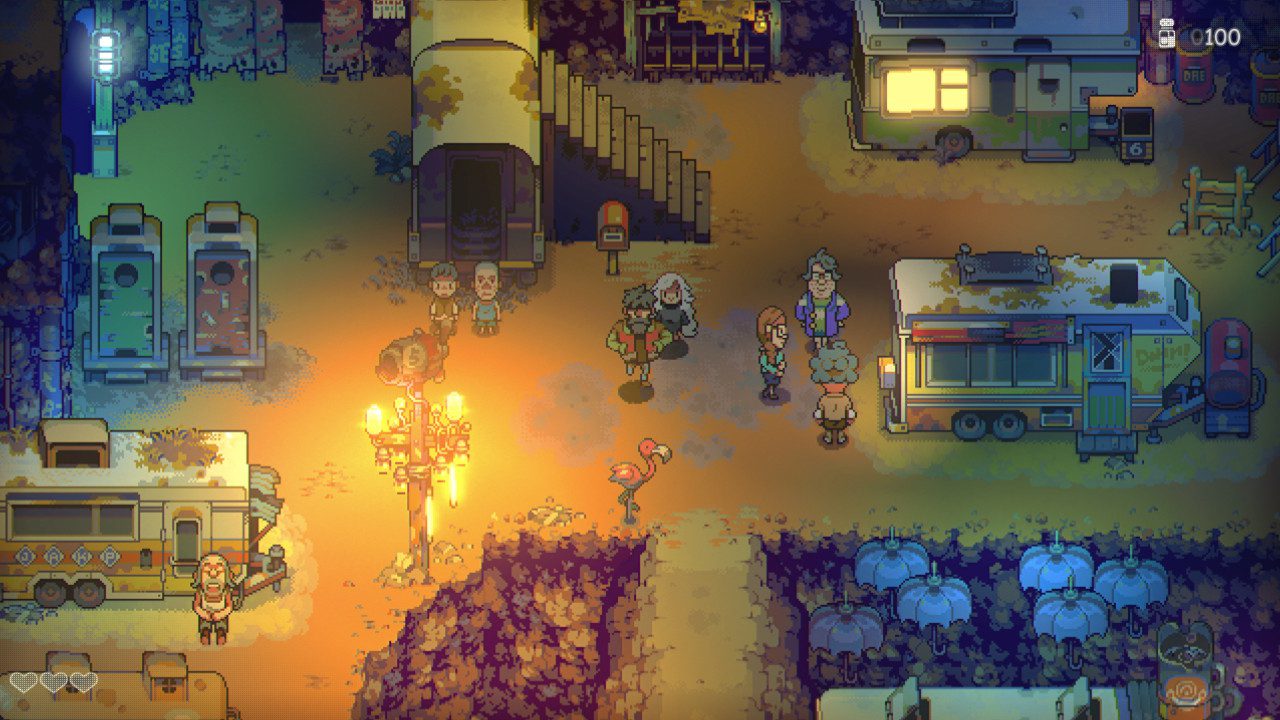 John is a silent protagonist, a point Eastward often pokes fun at, with characters having one-sided conversations with him or recognizing that it’s him on the radio when their calls go unanswered. It’s silly and lighthearted, and plays into a lot of the comedy in Eastward.

A lot of Eastward has good laughs, though it creates an awkward pacing problem when things get much more dramatic and tense. Eastward takes a while to establish some characters and flesh them out, and with John silent and Sam sometimes unaware, the early half of Eastward had trouble getting me invested. It wasn’t until I was well into New Dam City, Eastward‘s largest hub and home to one of its longer chapters, that I started to get really interested in the characters around me.

Those characters are made up of similar pairs: the father-son duo William and Daniel, and the couple Isabel and Alva. They form some solid pillars of growth, change, and emotion that by extension help John and Sam have more direction, too. Even so, the story’s latter half still veers off into odd side ventures. And one of the main villains, Solomon, is an enigma that never really solves or sticks; he just seems present when an antagonist is called for, and I never felt I understood his motivations or, really, much of anything about him.

Even so, when Eastward hits, it hits hard. There are still standout story moments, ranging from shocking and emotionally draining to laugh-out-loud funny. Its greatest moments are bolstered even further by the clear amount of work and passion put into Eastward‘s look. 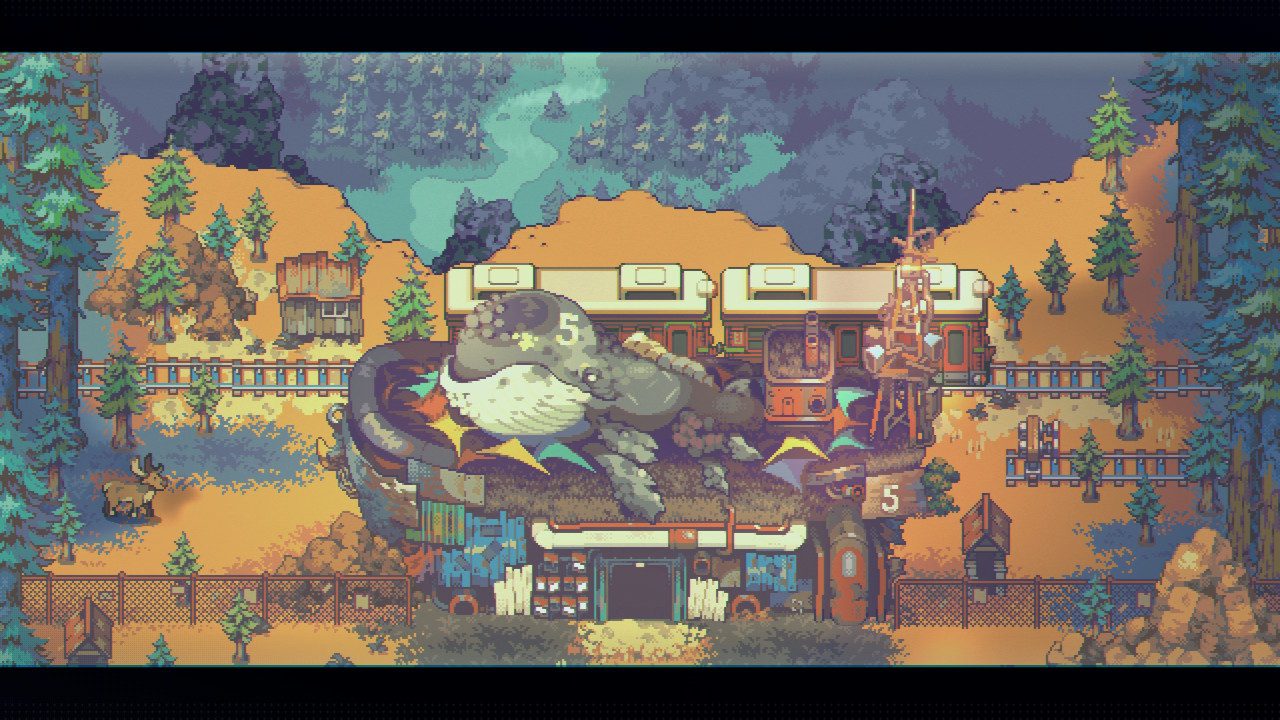 It is, simply put, one of the prettiest pixel art games I’ve played in a while. It doesn’t just look good in stills, but it plays out incredibly well in motion as well. One aspect that continually took me aback about Eastward was its animations. Everything, from idle animations to little trademark motions, clearly conveys who a character is, how they feel, and what their personality is like. The way Lee grimaces when Alva chides him for smoking indoors; the cold, calculated way Isabel reaches for her blade; and especially the little celebrations Sam and John do after winning an arena fight or finding a key, all continuously remind you of who these characters are, and how they feel in the moment.

And then there’s Eastward‘s soundtrack, which is a frontrunner for my favorite soundtrack this year. It hits just right. Sometimes it’s a small town with quiet little melodies or cheerful chirps, or maybe a somber, nostalgic tune wallowing in the background. Or it’s a big theme, dropping perfectly in time with a dramatic on-screen moment to drive home how far John and Sam have come thus far. Eastward‘s music is absolutely brilliant.

When it comes to the moment-to-moment gameplay, Eastward handles like a top-down adventure game of old, similar to The Legend of Zelda or Secret of Mana. John starts out with his trusty cast-iron pan that he also uses to cook (which is a neat minigame with some clear Breath of the Wild inspiration, and also seems incredibly unsanitary). Over time, he’ll build up an arsenal of firearms and bombs, often destroying obstacles head-on and using his pan to smack bombs across gaps or into flammable objects (which, again, seems like a bad idea). 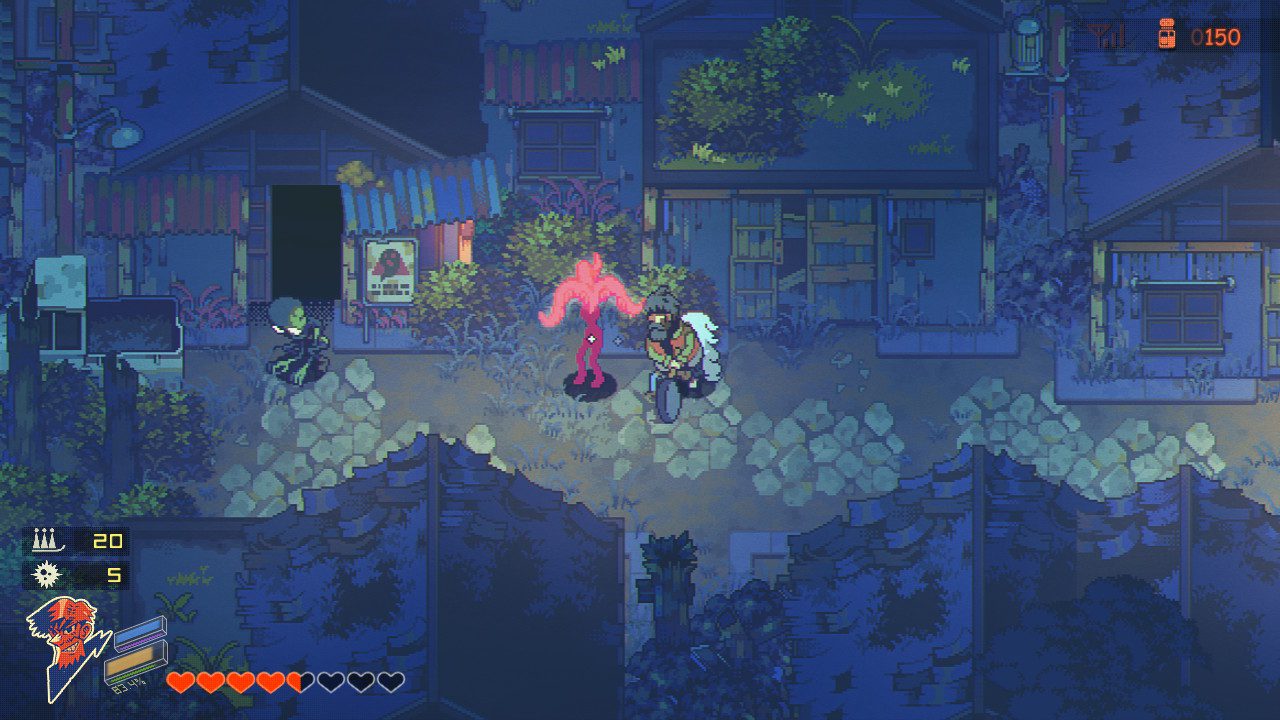 Sam, meanwhile, functions as a psychic user that can remove or activate special obstacles and freeze enemies in place for John. Battles start out fairly straightforward: freeze an enemy, beat them to death with your pan. Repeat. Early on, enemies are easy to understand and deal with, and swapping can sometimes feel unnecessary.

Eventually, enemies get more numerous and pick up a few tricks, though regular enemies didn’t really start giving me trouble until much later in the game. That curve is fine, though bosses in general ramp the difficulty up significantly, requiring you to make use of most of your capabilities and start tapping into your cooked food reserves, which can provide bonuses like damage boosts, temporary extra hearts, and heightened defense.

The boss fights are often a spectacle, and a number of them really stand out as engaging, entertaining encounters. The one rough part is that sometimes, the Nintendo Switch can struggle to keep pace with Eastward‘s action. A few big fights in particular saw a lot of slowdown, which given the damage bosses can do and the finesse needed to dodge attacks, made them a little more harrowing than they needed to be. I also experienced a few crashes, though thankfully, Eastward‘s autosave function is pretty lenient and I never lost more than a couple minutes’ progress. 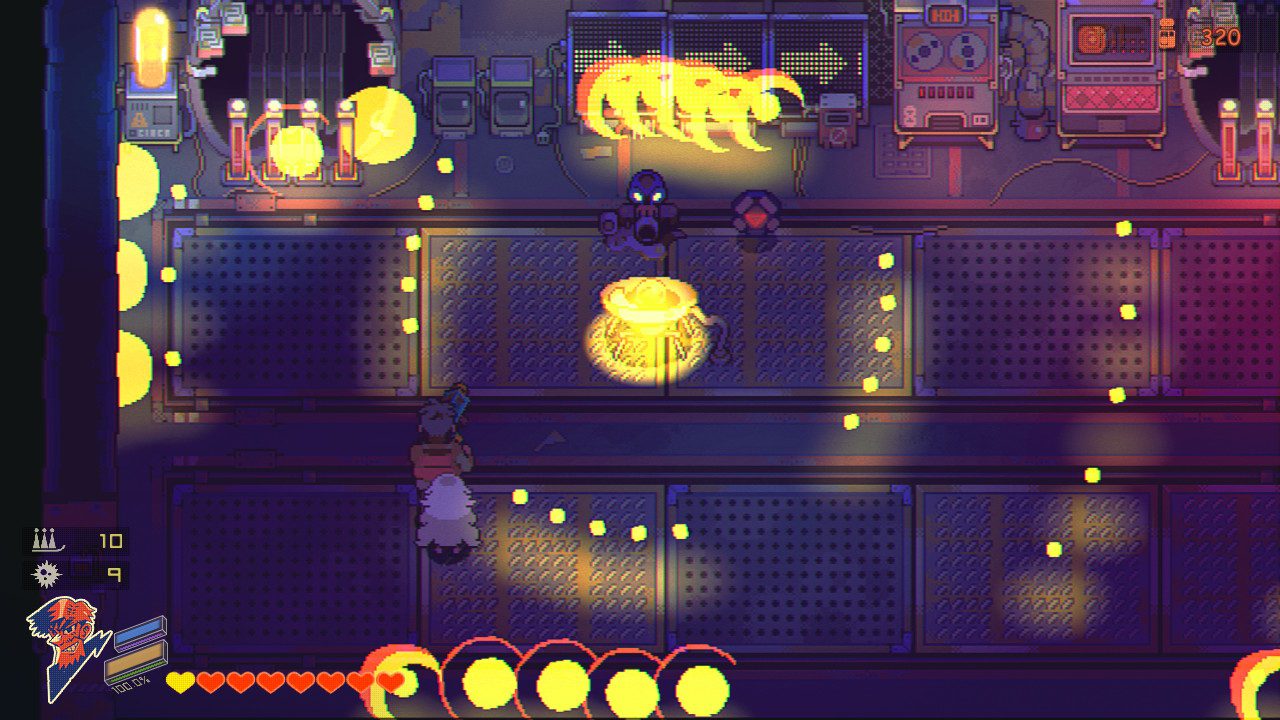 Puzzles, meanwhile, start out pretty easy but eventually become fun challenges to complete. There weren’t any I had to struggle and set down my Switch to ponder over, but Eastward finds some clever ways to make use of Sam and John’s abilities, as well as splitting them up and setting them along separate paths, to create some puzzles that feel very rewarding to complete.

By the end of my time with Eastward, I felt like I’d reached a conclusion with some satisfying notes, though it left me with more questions than answers. It seems like there’s enough room here for a sequel, which I’d really like given how some pieces of the story never got fleshed out, and some threads were left without much closure compared to others. I think ultimately John’s eerie silence ends up playing against the story’s emotional stakes, and the shifting goals and objectives made the journey to the end feel a bit scattershot. Part of me wishes Eastward was just a little bit more focused, with a more apparent and concentrated effort to get its themes across. The main narrative just rarely, if ever, feels as consistent as its little moments do. 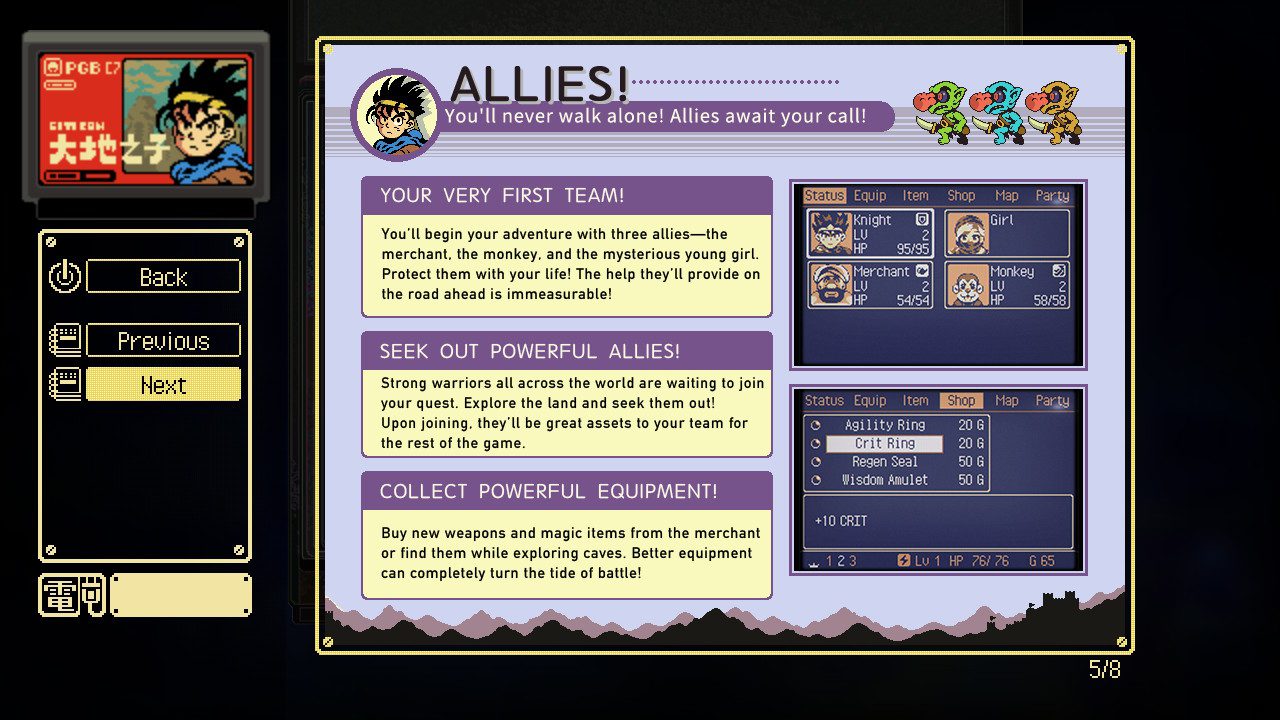 Maybe the idea is to really pull you in with slice-of-life cheer, to create attachment, but I felt like Eastward struggled to make its dramatic tensions match its endearing, cozy charms. Eastward pays a lot of homage, but those loving references feel like just that. One exception is the game-within-a-game you can play throughout the story, Earth Born. It’s a roguelike RPG in the vein of Dragon Quest that narratively mirrors the main story, and it’s extremely good. I might make a new save file just to play more Earth Born.

For as gorgeous as Eastward‘s graphics are, and as endearing as some of its characters become, and as much as I need its soundtrack on vinyl as soon as possible, it also falls short in some ways that leave its conclusion feeling a bit off. It’s one of the more promising debuts I’ve seen, and Pixpil has ensured I’ll be incredibly interested in whatever they do next. Eastward is something a fan of pixel art and good music, with a weakness for video game nostalgia, deserves to check out. It’s just also a journey that left me wanting a little more.

[This review is based on a retail build of the game provided by the publisher.]

Is It Everything You Need? K+F Concept Filter Package Review