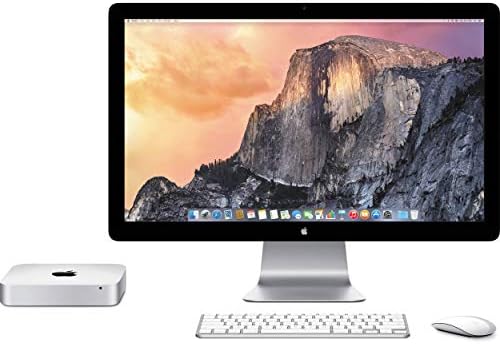 The Apple Mac mini “Core i5” 2.6 (Late 2014/Aluminum Unibody) features a 22 nm “Haswell” 2.6 GHz Intel “Core i5” (4278U) processor with two independent processor “cores” on a single chip, a 3 MB shared level 3 cache, 8 GB of onboard 1600 MHz LPDDR3 SDRAM, various hard drive options, and an “integrated” Intel Iris 5100 graphics processor that shares system memory. Connectivity includes two Thunderbolt 2 ports, four USB 3.0 ports, an HDMI port, Gigabit Ethernet, 802.11ac Wi-Fi (802.11a/b/g/n compatible), and Bluetooth 4.0 as well as an SDXC card slot. Compared to its predecessor, this model looks identical, but it has a more advanced architecture and graphics, Thunderbolt 2 capability, and faster Wi-Fi. On the other hand, it has a processor with half the number of cores, no longer supports Firewire, has RAM that can no longer be upgraded, and no longer supports two 2.5″ drives.

There are no reviews yet.

Added to wishlistRemoved from wishlist 0
Add to compare

Added to wishlistRemoved from wishlist 0
Add to compare
$2,499.00