Xiaomi was the first major brand to showcase the Mi Air Charge technology earlier this year, allowing users to charge their devices over the air. Motorola also briefly announced its own counterpart in May, Motorola Air Charging. Today it decided to showcase its work and tell more about it.

Motorola Air Charging does not require charging cables and is not limited by the location of the power source. As soon as the user enters the room, the smartphone will start charging automatically. The technology is capable of itself detecting gadgets in the area of ​​operation and it is possible to charge simultaneously four devices located at a distance of 3 meters.

The air docking station consists of 1600 antennas that can charge four devices at the same time, no matter if they are blocked or not. The signal is capable of passing through paper and other obstacles, and the station will also suspend charging if it detects a person in its area of activation thanks to the built-in biological monitoring technology. 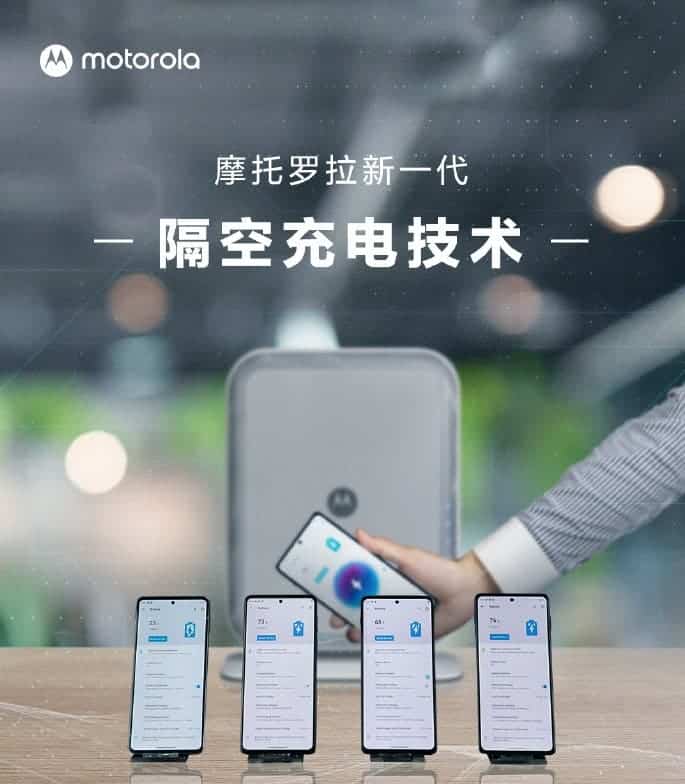 Unfortunately, Motorola chose not to voice the speed at which the air charge takes place. Insiders tell us that its power does not exceed 5 W, and this is quite modest. It will take a long time to charge devices with batteries from 4000 mAh to 5000 mAh; so the effectiveness of such charging is questionable.

On the other hand, even 5 W will be enough to keep the devices charging if the user, for example, is in the office and room during the day. Also, this charge is enough to charge Bluetooth headphones or smartwatches.

Motorola is expected to add some new features in the future, such as multi-size antennas, multi-device communication and AI smart frequency modulation. Motorola Air Charging will also be compatible with the Qi wireless charging protocol, paving the way for the commercialization of Air Charging technology.

Recall that Xiaomi Mi Air Charge technology is using five built-in antennas; the device will determine the position of the device in the room. Air Charge then charges it by transmitting millimeter waves through 144 built-in antennas. To receive the signal, Xiaomi devices will be equipped with two sensors; a beacon for determining the position in the room and an antenna array for receiving waves and converting them.

Xiaomi has said it is committed to making the technology truly wireless. According to the developers, this will allow each device to charge up to 5W. At the same time, physical obstacles do not reduce its effectiveness. The device will charge smartphones, fitness bracelets and smartwatches.

Xiaomi has not yet announced a release date for any products using this technology. In a conversation with The Verge, a company spokesman said that those will not launch until the end of 2021.

Student Tech Survival Guide with Back to School deals