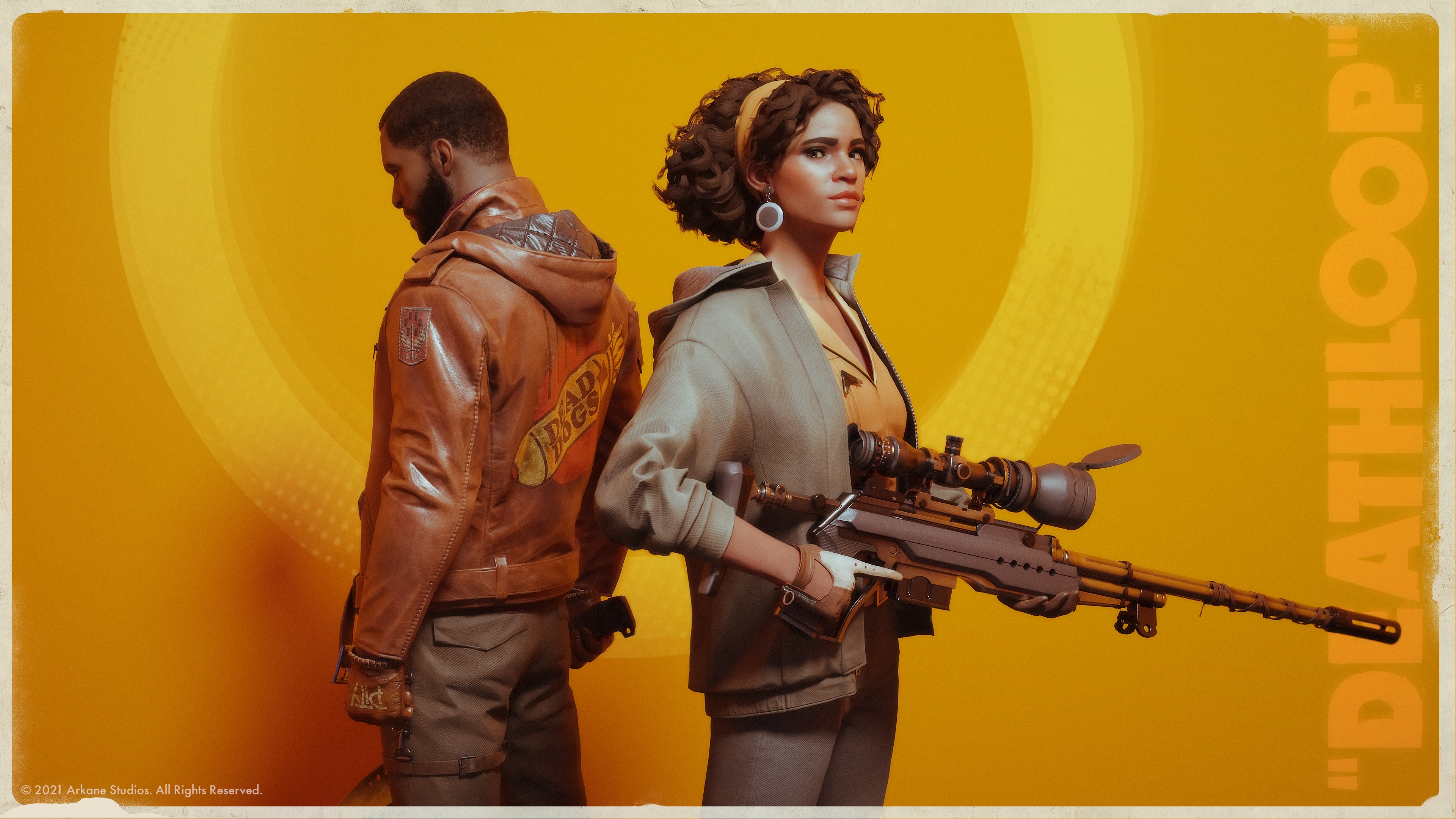 Deathloop takes some of the fundamental mechanics found in Arkane Studios’ previous Dishonored games and presents them in a new twist with more gameplay options. While Dishonored is primarily a stealth game with the occasional option given to players for wreaking havoc, Deathloop wears its craziness on its sleeve by letting the player choose how they make their own fun.

The latest game to use a time loop mechanic in a year full of time-loop games, Deathloop uses it as a narrative device in a way that feels a little too linear for what its elevator pitch is. While most of the marketing leading up to Deathloop’s launch would have you believe that it is up to the player on deciding how to progress the story, the actual game is a little more straightforward than that.

You play as Colt as he wakes up on the shore of a mysterious Blackreef island, having forgotten any memories he had prior. As you make your way through the island, Julianna, a former flame and rival of Colt, challenges him to break the time loop if he wants to escape this nightmare, where every inhabitant of the island wants to kill him, while she hunts you down. The stage is set – you have 8 targets and one day to kill them all before the loop resets. That is the core objective of Deathloop, and how you go about it is relatively open-ended, except at certain moments where you’re forced to follow linear paths and mini-map markers.How you move around Blackreef and take down Visionaries depends on what tools you choose to deploy at the start of ‘level’, which all ties back into the time loop. Every time you start the loop, you can choose to explore any one of the four areas on Blackreef at a specific time of the day – morning, noon, afternoon and night. After you’re done exploring that area, you can exit using the underground tunnels where you can select the next area to move into, by which time that stage of the day will have passed. You can also choose to wait until your preferred time of day to move into an area, which opens up new opportunities in exploring that area.

For each of the main targets, called Visionaries, that you kill, you gain a ‘slab’ which is essentially a special ability. These can include familiar skills from the Dishonored games like the “Shift” ability, or the smart “Nexus” ability which lets Colt link, two enemies, together to deal damage to both in one attack. These are relatively easy to acquire at the start of the game, and as the story progresses you gain access to more slabs. Deathloop has an in-game currency called Residuum which Colt can collect from enemies and random objects, which can then be used to upgrade weapons and allow keeping them through consequent loops. This is extremely important, as early on in the game it can get quite easy to die in encounters if you’re not careful, leading to loss of weapons and abilities. At the very least, you’re given a permanent ability allowing Colt to be resurrected two times before dying to the final blow, making any mistakes made by players in any particular segment a little less punishing.

The game achieves all of this with a refreshing lack of expository cutscenes, with Arkane’s excellent environmental storytelling being in full swing. Each area of the game is dense and packs enough information to flesh out each character and the reasoning behind their personalities. Sure, there are some standard modes of exposition like audio records and collectable documents, a lot of which are required to move the story forward, but none of it feels like it was thrown in to pad out the game’s length. Almost every piece of information you find is important enough to remember and keep a track of, as Deathloop is at its best when it asks the player to use their brain instead of following objective markers.

You can stealth your way through Deathloop or go in guns blazing in each level, and both of those methods are viable thanks to open-ended level design and an intentionally stupid AI present on enemies. I’ve seen a lot of negative discourse surrounding the enemy AI in the game, and while sometimes it can feel a little too easy picking them off using moderate stealth, Deathloop is ultimately not about those enemies. The challenge in Deathloop doesn’t come from how you use your gun and abilities to kill Blackreef’s residents, it comes from how the player can use every tool and piece of information available to efficiently traverse through a level and get to the visionaries.

These tools include not only slabs for abilities but also special trinkets that most enemies drop, that can then be used to upgrade specific features of your weapons. Given the repeatable nature of the gameplay, you’ll find yourself aligning with certain trinkets for certain weapons, ultimately leading to a custom build suited to your playstyle and powers. You also have a handy “Hackamajig” – a device which lets you hack many security measures to gain a tactical upper hand, which comes in handy when dealing with Julianna or plotting escape routes. This makes it so that while the opening and ending of each players’ journey will be relatively the same, the way you go about it will undoubtedly make for some special moments that only you can experience.

When the game does feel like it’s getting a little too easy, Julianna comes for the kill which makes for some tense escape sequences. Deathloop includes an optional multiplayer mode where you can play Julianna, complete with her own slate of weapons and abilities, to hunt down Colt. If you’re playing offline then you’ll encounter an AI-controlled Julianna who, while challenging on her own thanks to her abilities, is a minor inconvenience compared to an actual player invading your single-player session. It’s a clever use of online systems that never forces you to take part in it, though playing as Julianna and messing with other players’ progress makes for some fun times, if you know your way around Blackreef and how to use your abilities the right way.

Deathloop may not look as “next-gen” as some other games that have been released this year, but it plays extremely well on PS5. The game offers three different performance tiers:

I played most of the game in performance mode, as I found the frame drops in the Visual mode quite distracting and the ray-tracing improvements not worth halving the performance. Of course, performance mode has the lower pixel output on average, but the fluidity in movement more than makes up for the minimal lack of clarity. The PS5 version supports haptic feedback and adaptive triggers on the DualSense controller, which feel more subtle in their use compared to games like Returnal, another PS5 exclusive time-loop game.

One area of the game that does call into question how much it takes advantage of the new console’s hardware is the excessive loading. After clearing any area, the game will boot into the inventory menu in a matter of maybe five-ten seconds, but given the nature of the game, you’ll be seeing these micro-loading screens a lot. This becomes frustrating quickly, and although it’s not close to the long loading times of the past on the PS4 generation, one doesn’t need to look further than recent PS5 games (even multi-platform games like Marvel’s Avengers) to wonder whether that SSD is being tapped into the way it should.

While I haven’t played the game on PC, it’s worth noting that its port did launch with performance issues and that they should be fixed in the near future, if they aren’t already by the time this review is out.

Deathloop India Price – Worth It

Being exclusive to PS5 on consoles, I was surprised by the relatively standard pricing for the game. Deathloop costs Rs. 3,999 on PS5 and Rs. 2,499 on PC, which is in-line with AAA pricing of last-gen games, and I like it. It makes recommending the game that much easier, and given that Sony is distributing the game in India, it makes sense as the company is aware of demand for lower pricing in the country. The game’s replayability is baked into the core mechanics itself, making it so that chasing that Platinum trophy will require hours of work to perfect that ‘one’ loop, which is insanely fun.

Deathloop is available in two different editions, priced as follows:

Being a proponent of physical game copies, I like that Betheda also throws in a little manual along with a reversible cover on Deathloop’s physical copies, which arrived late in India. Hey, it’s the little things that count, right?

Arkane Studios’ Deathloop keeps the story in the backseat as its gameplay takes centre stage, turning what looks like a mindless shooter into a thoughtful murder mystery puzzle within a cleverly executed time loop.